I was made aware of micro plastics in fish several years ago from an online publication by Professor Richard Thompson in the UK and immediately I was concerned about whether or not my own fish were contaminated by microplastics because of the use of plastic biomedia, holding tanks, pipes etc… in my AP system.

My fears rang true and not only my own fish but many of my associates reported microplastics in their fish stocks. Many of my associates carried on regardless saying there is nothing to worry about as there is no direct harm to humans. For myself, I wasn’t satisfied and I wanted to reduce/eliminate the mircoplastics contamination for peace of mind.

Well it hasn’t been easy and after extensive research through trial and error, the main cause of microplastics in the system was caused by the plastic biomedia.

I sought an alternative to remove this contaminate from the system and there were a several options available but they were costly and damaging to the environment.

I needed a cheap organic effective solution and I successfully found that pine cone balls were able to replace my plastic biomedia balls with no performance issues.

When processing the pine cones to ensure they were clean prior to introducing them into my AP system, I noticed the murky cloudy water in a few of cleaning drums that I used to wash the pine cones had settled quite quickly and upon emptying them there was a congealed sludge at the bottom that I haven’t seen before. Under the microscope, the sludge consisted on organic material consistent to the pine cones that were covered in other material.

Well, I later found out that the pine cone dust acted like a coagulant in the murky cloudy water and stuck to the other materials and thus separating the them from the water and thus acted like a secondary water filter.

The sludge was recycled as an organic fertiliser.

Wow, that is really interesting. Thanks for sharing @pniu! Do you have any images that you are able to share? I would love to see and hear more about how it progresses.

How long has the system been cycling since you changed to pine cones?
What is the ratio of pine cones to your system sizing?
What are the nitrogen parameters like since?

I think theres some major issues your over looking. First off the tannins in pine cones are not at all good for your fish or plants. About half of all pine species are toxic so it would have to be from a single needle not double needle pine if you were going to even attempt it.

Unless your doing DWC online you DO NOT need mbbrs or other over hyped solutions. You need properly sized radial flow filter, and offline brewer to mineralize your fish waste, and the right microbial inputs it works 10x better than the mbbrs which again are really only needed if you only have dwc beds and nothing else which a properly designed system has at least 15% of the system as media beds. Even at 5% of the system size they still out perform mbbrs. Your pine cones will also bread down pretty fast we see the same issues with coco medias in aquaponics the microbes start to break it down in about 6 months.

Thanks for your feedback.
Yes, I encountered such issues during the trials prior to adding them to a circulatory system.

During the trials different species of pine cones went through several tests to clean, preserve and prevent contracting etc…

The tannin from the pine cones didn’t harm the fish and has a good pH with other publicised benefits.

The coagulation discovery, was discovered during these trials.

I have spoken about this discovery to many people over the years and I’m surprised someone has actually published a paper on it.

Turbidity is a characteristic impurity of groundwater in Pakistan. Turbid water is not suitable for drinking purposes. The main objective of this stud…

My loss for sharing.

Can you kindly add some ideas to help reduce or eliminate micro plastics in AP systems please?

My research and other intellectual property was acquired by my former business partners in 2019.

However, I have an associate in Suzhou near Shanghai, China… who maybe still running his bamboo AP system with the pine cones filters.

I ask him and find out, it’ll be also good to have an update.

I am confused. While i certainly understand how in nature and especially ocean food chains that microplastics can slowly accumulate this is a complete non issue entirely for aquaculture or aquaponics system. You use a known input either pelletized fish feed or live foods produced on site. There is no food chain to accumulate such plastics. I think you might be confused about the whole microplastic issue entirely as long as you do not use MBBRs which can grind and create such things but we already addressed they fact that the are not needed at all in a properly designed system.

I would be extremely concerned about suggesting any one just use any pine cone as a media again they have a whole host of issues of there own including fish toxicity for many species, saponin content, and tannin contents. The accumulation of saponins in the system from such media is certainly a major concern.

I am a bit confused about the issue you are trying to solve tho there are no microplastics in a properly designed system what is it your trying to solve? Microplastics are made for cleaning products and soaps ect or as a lubricant. Its not something that is just chipping off of plastic used in systems. People have to stop this senseless fear of plastic in aquaponics its not based on any science. 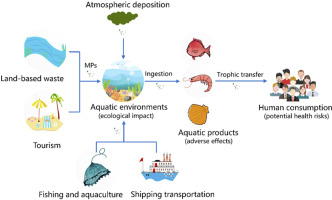 Occurrence and ecological impact of microplastics in aquaculture ecosystems

Extensive applications of plastic in human life has caused substantial microplastic pollution in the global environment, which, due to plastic’s ubiqu…

I have just emailed a few biomedia manufacturers, including a local manufacturer called Warden Biomedia.

I know this line of enquiries will certainly rattle a few cages as it can harm the industry if the risk hasn’t been researched or publicised along with their products.

I have made this enquiry below with Warden Biomedia on the following product and awaiting a reply:

During the products normal use, wear and tear eventually degrades the product. What research has been made on the micro plastics contamination of fish whilst using your products?

Please stop. The aquaponics industry has enough real battles we dont need to invite new fake ones that have little to no basis on reality.

There is no issue around plastics and aquaponics this is a solution looking for a problem.

My apologies if the proven technical research data is a bit too much for you to comprehend but unless you can provide an alternative organic solution to remove plastics from aquaculture or AP systems then it’s best not to reply further.

Mycelium… can you name another?