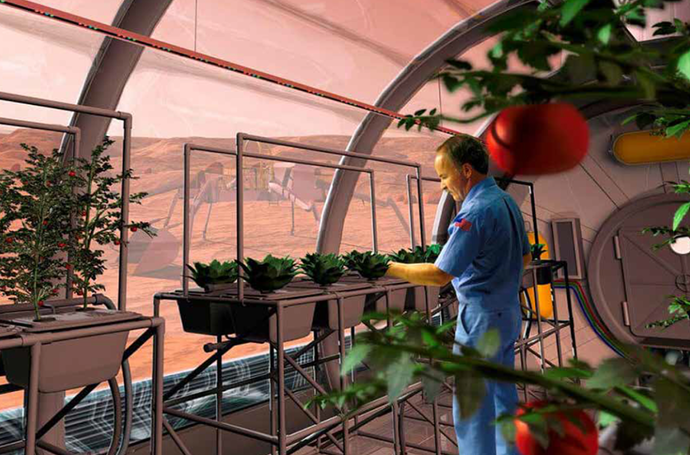 There has been several recent pieces of news highlighting aquaponics’ potential role in long-distance space travel!

In February, The Observer ran an article, “NASA’s Mission to Mars Could Be Fueled by Fish”. The article details a NASA research team of multi-disciplinary scientists studying how to feed astronauts on long-distance voyages.

Separately, @carlmazur spoke with The Fish Site about the Terra-Mars Project. The Project aims to create a Mars Theme Park that showcases a prototype aquaponic system that could be used on the Red Planet.

Dr. Roberson, a Senior Principal Investigator for Flight Research at NASA, stated: “The first challenge is recognizing which systems can be sustainable, operate in microgravity, and provide the nutrient content that will last around a two-year mission to Mars”.

One problem is the production of protein in space, which is why fish are an attractive option. Researchers note that: 1) Fish can be taken into space as fertilized eggs and then grown to full size on board; 2) herbivorous fish like tilapia efficiently produce protein and can eat the plant scraps from hydroponic systems that aren’t suitable for humans; and 3) aquatic mollusks like snails or mussels are an interesting option because they can simultaneously filter water.

Regarding the Terra-Mars Project, @carlmazur noted: “a system advanced enough to be on Mars will be able to grow food anywhere on Earth, with modifications. The ultimate goal is to have a system that can provide food security for any environment on Earth and thereby end the suffering that still occurs in some developing countries. Having the ambitious goal of developing a food production system for Mars should provide ample PR exposure which can then be leveraged to promote the project and help to carry it forward.”

Ten or fifteen years ago, NASA reached out to expert aquaponics grower Phil Reasons (now of Aquasol International) and told him that they had a tilapia that had been born in space, and that they didn’t have any more use for it. Phil said he would take it, and the space-born tilapia was transported and lived in his aquaponic system for several years.

What is next for aquaponics in space?!

Hi Brian,
Thank you for mentioning our Terra-Mars Project in your article about Aquaponics in space. I’ll be happy to add The Aquaponics Association and link to the article in our Media Sponsors section on our website.
Kind regards,
Carl Mazur